We Made a Movie!

We made a movie! Now what?

Actually let me back track a little. I'm sure most of you, including myself, were wondering: where are the posts about making the movie (titled The Diary of Preston Plummer)? I mysteriously fell off the face of my blog from pre-production until now.

Yes, I agree I should have been posting every day! But, after I evaluated the insanity of making a movie with no production staff, I decided the world nor my blog would end without me posting about it here. I am a filmmaker first so my priority as a producer took precedence over my blog, in this instance. Hopefully, I will have a staff on my next project and I can be blogging from set.

I wasn't completely remiss in my reporting duties. I did make time to post (almost daily) on the Facebook page for the film. So if anyone is curious how things progressed during the shoot, you can click here and take a look on Diary's Facebook page. Become a fan too! We need you and it's a great film -- I promise. You can see a ton of really cool photos we took while there as well. Amelia Island is gorgeous!

That's the thing about being in production on a movie. It takes over your life. For the weeks you are physically making the film, your attention is 100% focused on making the best film possible for the least amount of money possible.

As producer, I am constantly coordinating and searching for the best deals that will make the show run as smoothly and as cost effectively as it possibly can. It is NONSTOP. I could be coordinating 24/7 and still think of more things to do. Ask my crew, I think they saw me sleep an average of 4 hours a night (something I don't recommend but, again, when you have no staff, you forego a few zzzzs).

We made it through the other side and we are really happy with the film. And we had a blast working together. I am so proud of our filmmaking family. From here, we tackle post and promotion and sales -- areas that are just as hard and time-consuming as production but we're ready -- bring it on!

Diary's fantastic cast and crew. I love you guys!: 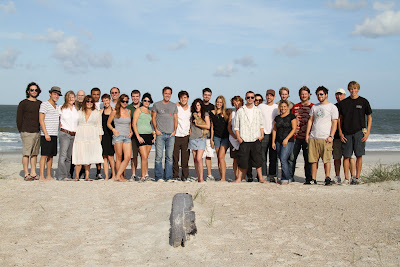 Well done. Looking forward to seeing the final result. I've just finished principal photography on my first short. I produced and directed it myself but had only two locations, a cast of three, no budget and a stack if volunteers. Can't image the headache you must have had. Tough as it is though it's an amazing feeling to have pulled it together. Well done again.

Awesome! Congrats! Just keep in mind for your next film that a producer has the sales stuff down before the movie even hits production. You can leverage with dailies coming in everyday. Keep it moving.

Not long to get your finished film in Big Break contest from @IAMROGUE and AMC theaters... http://bit.ly/9msubK

Hey guys if you know a film maker that need a soundtrack, check this one that is available.

Called: Love is an action

Where the Darkness has to Run said...

Well done, have enjoyed reading your blog. We are making a documentary about spirituality in India, it would be great if you could check it out.
http://www.blogger.com/profile/17964799383047372121