Our New Movie Epiphany - 27 Years in the Making! Please Follow Us on Seed&Spark!

I have this knack of producing movies in the dead heat of summer. I don't know why but I find myself in Florida or Georgia or Connecticut or Los Angeles making films when it's over 100 degrees outside. It's brutal but I can't seem to stop. Probably because that's when the film and television industry slows down and small films have a chance at getting actors who are available and secure equipment and locations at a discount etc.

Anyway, long story short, I produced another film this past summer in Florida. It's called Epiphany. I really love this story. It's about a young girl Luka (played by the super talented Caitlin Carmichael) who wants to reconnect with her biological father - a Greek sponge diver named Theo (played by Australian actor Alex Dimitriades). We also have George Georgiou, Scottie Thompson and Burt Young rounding out the lead cast! So blessed to work with such talented people. And our crew! So amazing. Love them all to pieces. 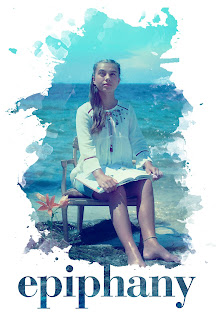 Epiphany is set in modern-day Tarpon Springs and we basically shot all around the area of Tarpon Springs including the Anclote River, just at the mouth of the Gulf of Mexico. And yes, it was in the 90s every day and humid as all get out. When you produce a film in crazy heat, you have to be concerned with your cast and crew's health. They need access to shade and lots of water and ice and AC. You have to know there is somewhere they can go to cool off because heat stroke is a real factor. It's all just a bit stressful...

Additionally, late summer/early fall is hurricane season. It just so happened that we filmed in Tarpon Springs, Florida in July and August and wrapped picture three weeks prior to Hurricane Irma - which blew over Tarpon Springs! If we had pushed our shoot one month, we would have had our production smack dab in the path of an oncoming hurricane. Luckily, we had wrapped in time and Tarpon Springs made it through Irma without too much damage. Our thoughts and prayers are with those who were affected by Irma as well as Harvey and Jose and Maria and the fires in CA and the earthquakes in Mexico. We hope the recovery goes well in all the hard hit areas.

As for Epiphany, the idea for the story came from the writer/director team Koula Sossiadis Kazista and Katina Sossiadis. They both grew up going to Tarpon Springs each summer. It's a very charming town near the Gulf Coast with a strong Greek community. It's also the hub for sponge diving. About 27 years ago, Koula decided to write a screenplay about a sponge diving family set in Tarpon Springs. Cut to today after many years of starts/stops and rewrites - the film has finally been made and we are in post production. I am so happy and proud of our efforts. And I'm so happy for Koula who has spent decades trying to tell this story and it's finally happening. And it's going to be a beautiful film. To top it all off, it was a female-led crew - love my producing partners and directors: 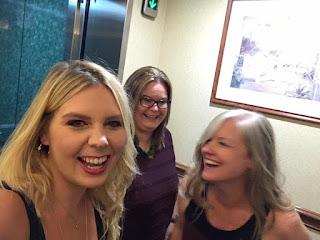 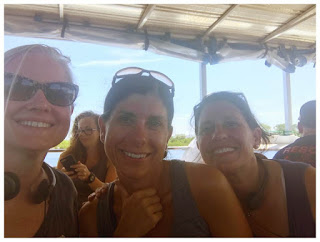 The journey of one movie is so amazing to me. It's probably why I love making them. Last year we made a movie titled 20 Weeks about a young couple who finds out their baby in utero may have a genetic issue. The writer/director Leena Pendharkar had the idea and wrote it in less than a year. We went into production six months later and we have already had a World Premiere at the Los Angeles Film Festival in June. We are going on an eight-city festival tour in October/November. That was the fastest I've ever moved on making a movie. And Epiphany is probably the longest gestation period I've experienced for a film - though I really only joined Epiphany officially about two to three years ago.

We had a wonderful shoot (despite the heat - haha). And now we are in post production - excited to complete the film with great music and color. And we wanted to get the word out that we have entered a contest on the crowdfunding site Seed&Spark, sponsored by the Duplass Brothers. The winners can pitch the Duplass Brothers and see if they will come on board their film as Executive Producers and have them bring money toward finishing the film - up to $25k. Having the Duplass Brothers executive produce our film and provide us with finishing funds would be incredibly helpful to our small independent feature. 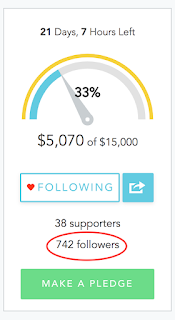 So...I hope I can ask my blog readers to please follow our campaign on Seed&Spark. You don't have to contribute any money to follow the campaign and the number of followers on our campaign really does make a big difference. It allows us to get to the finals and get the exposure we need for the film to have a fighting chance. So please click on this link and help us make it to the finals! Thank you!

And if you are able to contribute to the campaign, thank you so much! See you at the movies everyone! Much love!!
Posted by janekk at 11:11 PM