We are two days into production on our new film! We are filming in Los Angeles and it's awesome to be home making a movie. Though the permit process in LA is intense and most locations require a fee for use, it's nice to be able sleep in my own bed at night.

I am producing Leena Pendharkar's new feature film titled 20 Weeks. Leena and I have been creating content together for a few years now (remember our So Natural TV shoots?) and with the support of a number of people such as our executive producer Renuka Pullat, who has been key to making this shoot possible, and those contributing to our 20 Weeks IndieGoGo campaign, we have been able to greenlight Leena's second feature 20 Weeks.

The script was inspired by Leena's own experience: 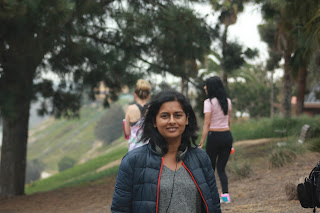 In the summer of 2014, as I was pregnant with my second daughter and making my short film, Dandekar Makes a Sandwich, my daughter was diagnosed with a serious issue health issue at the 20 week scan called micrognathia, in which the baby’s chin is undersized. My husband and I were just shocked as it seemed to come out of nowhere.

The doctors knew the measurements weren’t coming out right, but they couldn’t definitively diagnose what she had or what the issue might be when she was born. We had to undergo genetic testing, and we also were forced to come in and do sonograms every couple of weeks to make sure her growth was on a typical curve. It was a very difficult experience, so many thoughts were going through my head….

My daughter was born in October of 2014 with a serious but treatable health condition called Pierre Robin Sequence. We didn’t know exactly what her prognosis would be when she was in utero, but the doctors had given us a range from not being able to breathe at all and having to wear tubes in her neck for two years, to something as mild as not being able to breastfeed. Me and my husband told no one we were going through this, I think we were in shock, and both of us on some level, were hoping it was nothing.

But when she was born, all of the in utero testing prepared us to be ready. We gave birth at a major trauma hospital, with doctors who knew how to treat her condition. There was a huge learning curve because we had to learn how to feed her with special bottles, and she had to undergo four surgeries… That first year was so tough… I almost don’t know how we made it through.

Going through this experience, I was really struck by the marriage of science and ethics, and how fragile the balance really is. Sitting in the room, looking at a sonogram the doctors ask you to make decisions that are tough, that are not easy, and you have to go on faith to move forward…

The part that was so challenging for us was just not knowing, staring at these images of a sonogram that feel like nothing but light and sound, and yet… It’s so much more….

I am so honored to be producing this heartfelt story. We have a phenomenally talented cast and crew. Here are a few pictures from set showcasing a few of them:

We have a three week shoot and we already have our editor David Hopper working. But we need your help! We need additional financing for our post production and we have 5 days left on our IndieGoGo crowdfunding campaign. We have partnered with the Make-a-Wish Greater Los Angeles on the campaign and every dollar contributed will have a portion going toward a young child's wish.

Click on the below widget to be directed to our campaign where you can learn more about the film and contribute toward its creation. Thank you so much for helping us make this important and special film.