It's time to step back and take a look at our first five days of our IndieGoGo Campaign for our new film Pitching Tents, a coming-of-age film set in the 1980s, and see what lessons we have learned thus far.

We're feeling the love! We are so excited at the strides we have made. Thanks to everyone who has supported us thus far! If you can, please check out our campaign and contribute (click on the image here) and spread the word - thank you so much:


Now, on to the 10 lessons we have learned thus far:

Crowdfunding is all about getting the word out to as many people as possible and building a solid foundation of supporters. The earlier you can start the process, the better off you will be. And that can include writing a blog (like I do with this blog), having an active Facebook and Twitter presence, building social media sites (Facebook, Twitter, Tumblr, Creative District, etc) for your movie and actively updating them every day or so, gathering email addresses of your fans and sending them newsletters about your work, and spreading the word about your projects to anyone who will listen.

2) Crowdfunding is a full-time job.

It's amazing how much time it takes to run a crowdfunding campaign. You could literally promote it from sun up to sun down, every day, and still have more places to which you could promote. So before you jump into a crowdfunding effort, make sure you have the time in your schedule to manage it appropriately. And if you can't work on it full-time then build a team that allows you to give a full-time effort. Which brings me to my next point...

We have five people on our core team of Pitching Tents who are actively promoting the campaign and that doesn't include our spouses and loved ones and close colleagues and cast and crew who are helping us get the word out. It takes a village to make a movie and that includes the crowdfunding campaign. Build a team to help make it happen. You will be much more successful and you will have others to lean on throughout. And you will need your team to help rally each other through the tough times. And a team can bring many more ideas to the table than you can dream of or execute yourself.

Here's three of us from the core team with our pics from the 1980s - the decade in which our film takes place! Totally rad!!

You never know when or from whom your next contribution will come. You will write a gazillion emails and tweets and Facebook updates and you won't know who will feel compelled to contribute. So keep on promoting, day in, day out. Hit up that new blogger. Write to that journalist you've been meaning to contact. Send an email to your aunt you haven't spoken to in a while. I know it's daunting and for many of us, it's downright scary. But if you want your film to be a success, you need to break out of your comfort zone and keep promoting Every. Single. Day. You have everything to gain and nothing to lose.


So often we get caught up in everything we have to do that we forget to say thanks to everyone who is helping to make our campaign and film a success. During this campaign, we are trying to make sure that we thank every single contributor on the campaign site and on our Facebook page individually. We are also adding their names onto a daily postcard of who has contributed that day: 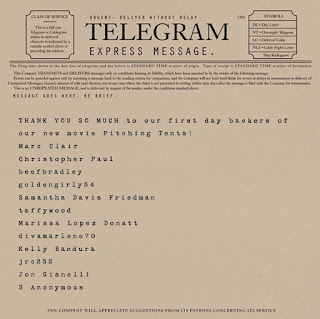 We want our contributors to know how much they are valued and that we truly are grateful for all of their support. Oh and we thank everyone on our own personal Facebook pages as well, which auto-tweet to our Twitter accounts. In the end, thank yous go a long way.

I too wake up each day worrying about failure but I know I can't allow those feelings to keep me down. No matter what happens, I have to pick myself back up and keep going. What other choice do I have? I want to make movies. And I know the only way I can do that is if I force myself to put one foot in front of the other and just keep pushing to make my career happen. Success = doing it. So just do it.

Have fun with your IndieGoGo campaign. Doing things outside of the box will only draw more attention and that's a good thing! For our campaign, one of our writer/producers is leaving on a road trip across the United States from LA to Connecticut, where we will be filming. We will need his car for the production and he thought it would be a good excuse to take his family on a road trip - dual purpose trip - we love it! So we thought, why not create a publicity campaign out of his road trip? Third-purpose trip!!! So starting this Monday, Jayme is going to start on the trip with his family and he will be posting updates, videos, pictures of the sights they see and rally support from those he meets along the way. We can't wait to push the film and our campaign while he's driving. It's creative and frankly, it's fun! And again, we have everything to gain and nothing to lose by it.

What's that saying? Don't reinvent the wheel. Well that's true for crowdfunding campaigns. Research those who have gone before you. See what worked for them and try it with your campaign. Read everything and watch every video you can about how to make your campaign a success. It will help.

IndieGoGo has been doing this for a while and the CEO offers some great suggestions based on hard data from their campaigns. Click here for his tips.

I received a lot of hope from this great video from Film Courage (who also did a wonderful Q&A with our director Jake here).

A positive attitude is incredibly important to your success in anything. Who wants to be around a grouch? Not me. I doubt you do either. There will be dark moments during your crowdfunding campaign when you will wonder why no one is contributing. You will feel like you're speaking but no one's listening, or worse, no one cares. You will cry out of frustration, fear and embarrassment at times during the process. No one wants to be a failure. But crowdfunding can make you feel like a failure - even those campaigns who have met their goals have experienced moments of darkness before they saw the light. Just know that you are doing something to make your project happen, regardless of the outcome. You have seized the day. You took control of your destiny and your film. You put yourself out there. You have everything to gain and nothing to lose.

10) Remember to help others.

It's important to your success to give back to the people who have helped you and to help others just like you! Give and you shall receive. Over the years, I have contributed to many Kickstarters and IndieGoGo campaigns and I have shared countless links and helped spread the word of many other campaigns and films. I have a drawer full of perks as proof and I wear my T-shirts from other campaigns to this day (in fact, I'm wearing one right now). And if I hadn't done that, I don't know how I would feel comfortable asking others to help me now. Crowdfunding is not a one-way street. Nor is filmmaking. Nor is anything in life really. We have to be there for each other. I know it's physically impossible to help everyone who asks for your help but remember to help as much as you can. And remember that contributing doesn't have to mean money. It can mean spreading the word about a film or a campaign to your friends and family and hopefully that same person will spread the word about your film and campaign when you're ready to make your own film and start your own campaign.


Well, those are some ten tips we've learned thus far. I'm sure we'll keep on learning more and I will share them with you. And thanks everyone for your continual support and reading my blog all these years! It warms my heart knowing you're out there, rooting for the success of the indie film industry. Let's come together and just do it!! Have a great day everyone!
Posted by janekk at 1:19 PM