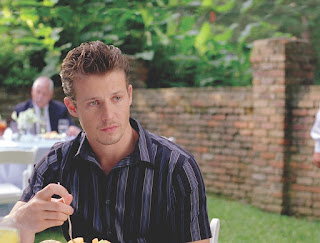 1) What do you like about being an actor? Are you glad you started at a young age?

Acting is a creative process. You tell a story through a character. Sometimes it's serious, about justice or loss, and sometimes it's fun or exciting action - it's whatever the story is. The goal as an actor is to live that character's experience. I'm glad I started when I did because I think it was a head start in the industry. It is a business and a lot of things go into allowing one to play the rolls they'd like to play.

2) You’re working on a new season of your hit TV show Blue Bloods. How do you relate to your character Jamie Reagan?

Anyway I can. I spend time with the technical advisors on the show, I've been in precincts here in New York, I observe and talk to police here on patrol and generally try to learn the things my character would know. I ask a lot of questions. I always wear the bullet proof vest in uniform because it reminds me that police do a dangerous job. It's uncomfortable and you can see it under the shirt. For me it adds something.

3) What are some of the exciting challenges about being part of Blue Bloods?

The schedule and pace are the biggest challenges. Sometimes we have only a short time to shoot a lot of stuff. You have to be ready all day to be your best at a moment's notice.

4) You’re a film actor too. How does TV acting differ from film acting and do you prefer one medium over the other?

I think the goal as an actor is basically the same but sometimes it's just a much different way of telling a story. Television requires much more pliability. There are usually more creative forces at work in television including the network itself so you have to be ready to collaborate about things you sometimes wish were just your own. Television is about making a great episode of a show each week.

5) You have also been in both studio and independent features. From an actor’s perspective, what are the differences between working on a studio film versus an independent one?

6) What’s the appeal of working on independent films?

Usually it's the cooks in the kitchen thing. Also, big budget films, aside from the biggest franchises, have all but gone away; but I think the appeal of independent film is that you can tell a more singular story for the sake of telling a story. There's so many angles for selling a big budget film before and while it's being made that independent films stand out as a more pure way to make a film. I think the movie industry is hurting; but deep in the arteries of the business there's still real, unbridled story telling that is alive in independent films.

7) We must talk about the independent film Not Since You! You starred in the film as Billy. What drew you to this role?

I read the script and really liked it. It was a gentle, honest, story about these friends and their lives spread apart and brought back together. In some ways it is a simple story about how we complicate our lives.

8) What’s coming up for you? Do you have any new projects we should be looking out for?

I worked on several different projects over the last break. I'm in an untitled film now called Inner Auto Project that I'm looking forward to the release of, I worked on a film called Mission Park in San Antonio, Texas, and I have a part in the next Dark Knight Rises Batman film. I also worked with Scott Glenn in a film called Magic Valley.

9) Do you have any advice for up-and-coming actors?

At the start of every UFC fight that he refs Big John McCarthy says: Fight clean, fight fair, fight hard.

Email ThisBlogThis!Share to TwitterShare to FacebookShare to Pinterest
Labels: Not Since You, Will Estes

have a question for will estes are you single will estes you are so handsome and very good looking and very cute pie . please beacareful on the blue bloods tonight..
sincerley your number fan erika conner

Will Estes has done great work in the movie batman And we all enjoyed the movie too. And ya your are handsome actor with good acting skills so keep it up with you great work.

Wow, awesome blog structure! How lengthy have you ever been blogging for? you make running a blog look easy. The entire glance of your web site is wonderful, neatly as} the content!