The Road to Sundance: A Morning Stroll, directed by Grant Orchard 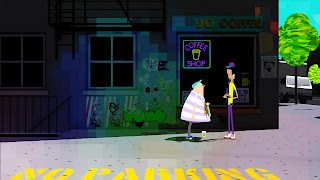 Tell us about your film. What inspired you to make it?
My names Grant Orchard and I’m the director of ‘A Morning Stroll.’ It’s a short 6 minute animated film that’s playing in the International Shorts section at this year’s Sundance Festival.

It’s about a man who spots a chicken walking down a busy Brooklyn street.  Basically it's like a 3 part riff on 'Why did the chicken cross the road?'

Initially I wanted to make a quick one minute film. I’d loved a one paragraph story published in Paul Auster’s ‘True Tales of American Life’ about a woman who spots a chicken walking down a busy city street.

It got me thinking of how ordinary those elements are, but how subtly, slyly surreal they are together.

At the same time I was reading ‘Exercises in Style’ by Raymond Queneau.  It’s a book that retells the fairly ordinary story of a man on a bus 99 times in 99 different styles.

I think those two influences converged and gave the basis for ‘A Morning Strolls’ triptych structure. It’s the meeting of a man and a chicken on a busy New York street, told 3 times over three different time periods.

So what was originally a one minute film became a 3 minute film in 3 chapters. Basically I got a bit carried away.

How long did it take you to make your film?
Too long.  Just shy of 2 years.  The company I work for, STUDIO AKA, agreed to make it without any external funding for it, which was brilliant of them.  So we had to use people within the company when they weren’t working on paying commercials, which frankly isn’t very often. We’re usually very busy, so it was an incremental accumulation over two years. Also I got ill for about a year which didn’t help the process.  My puny body is such an inconvenience at times.

How did you finance your film?
As a company we self financed it.  Currently in Britain there’s absolutely no funding for short animated film.  TV channels can’t quite seem to find a way to air them, and the British Arts Council has been pretty much stripped by the government of funds.

What was the most challenging part of the filmmaking process and how did you overcome it?
It’s basically one story, told 3 different ways. But I wanted to keep all the compositions, camera moves and shot lengths exactly the same in all 3. The only things that changed were the designs and the characters reactions to one another. This required us to set up a template for each section and rigorously stick to it.  Sounds quite simple, but we had to find a way of telling the 3 different strands of the story within that template. Proved to be quite taxing and a little bit too much like hard work!
Tell us about your experience getting into Sundance. Are there any pointers for filmmakers for getting accepted?
Just make sure you are aware of the submission deadlines. We only just managed to submit our film in time, so when we heard that we had been selected we were over the moon.

If you had to make the film all over again, would you do anything different?
Oh yes, always.  There’s always something I’m not happy about. Bits of animation, design.  I’m very fiddly and fussy.  In general I’m happy with it though. I think.  It’s just when I see it I see the faults, it’s the problem of working on something over a long period of time and seeing it so many times.

I made a film about 8 years ago called ‘Welcome to Glaringly’ that I’m thinking of re-making now. The story and timings work but the sound and visuals don’t do it for me anymore.  I just can’t leave it alone.

What’s next for your film? Do you have distribution? If so, when and how can people see it and if not, what are your hopes for the film?
It’s currently been Oscar shortlisted, so it would be nice if that could go onto the next stage.
It’s just started its festival run, and it’s already doing pretty well. It’s got another year or so of that then who knows, but I believe that we already have a handful of distribution offers on the table.
Hopefully it will have some kind of life beyond that.  There are so many short films, and so many good ones being made that I hope it will be one that’s remembered a few years on from now.

Can you provide any advice to other filmmakers who dream of getting their films made and into Sundance?
Just the terribly hackneyed bit of advice which is to make what you want to make, rather than make what you think people want to see. It’s clichéd but very valid.