The Road to Sundance: Meaning of Robots, directed by Matt Lenski 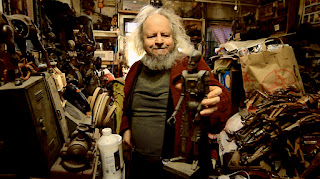 Tell us about your film. What inspired you to make it?
US Documentary shorts
The benevolent Mike Sullivan has been shooting a stop-motion robot sex film in his apartment for the last 15 years. Obsessed with constructing the miniature robot porn stars, his apartment now overflows with thousands of them leaving him only tiny paths for him to walk and no place to film his epic.
In the Spring of 2011, after years of hiring him to build miniature sets for my films I asked Mike Sullivan for his help on an art project. During the process I got a peek into his world and discovered that it was anything but miniature.

What I found was a man dedicated, overwhelmed, slightly lost and happy to share it with honesty and a little humor.

I also found thousands of Robots with wieners.

This is a character exploration, a documentary, a Henry Darger-esque allegory set in one studio apartment on 27th street in New York City. I was inspired to make this film out of love and respect for him.
How long did it take you to make your film?
From pre production to through completed post– 4 months. But if you include the time it took to build our relationship be invited in to his world you could say 4 years and 4 months.

How did you finance your film?
I funded this myself. And while technically the entire budget was 175 dollars to rent a wide angle lens,  countless dollars were spent in time by devoted crew. We shot, edited, reshot, and more. Whatever it took to make it better.

Tell us about your experience getting into Sundance. Are there any pointers for filmmakers for getting accepted?
I guess that was the other challenging aspect... what to do with it when it was done. I was encouraged to submit it by my dear friend, the executive producer, Jake Perlin. And I got the acceptance call the night before thanksgiving. Which was great because I actually had something tto talk about with my family on that day of dreaded face-stuffing, and awkward conversation – Thanksgiving

If I didn't get it in I wasn't going to be crest fallen though. I want to help Mike make his movie so I was planning to start a kickstarter page to help him with that and use the film to promote it.

My advice? Keep making your film better and do WHATEVER you want. Go back change things. Be totally precious and and not precious at the same time... oh... and work with people you respect. If you respect them, respect their ideas and the creative process.

If you had to make the film all over again, would you do anything different?
No.

For More Information:
Meaning of Robots Teaser
Posted by janekk at 9:49 PM