The Road to Sundance: Juku, directed by Kiro Russo 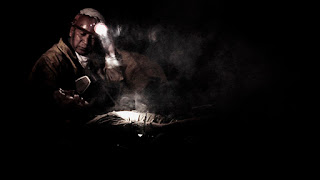 Tell us about your film. What inspired you to make it?
Our film is titled JUKU. The Jukus are mine thieves, expert miners who choose to risk their lifes in order to obtain large quantities of mineral. There are hundreds of stories about Jukus "Pirates" of the mine. When I was a child my grandmother told me many stories about the mine, she was from the mining town of Huanuni where we filmed the short film and I was always very curious about these stories and this world. On the other hand, JUKU has a lot to do with experimenting with light.

We start from the premise of how to handle a short where almost nothing is seen, and everything heard; this in a context that has gone through our
cinema´s and narrative history in different kinds of ways: the mines. JUKU will be screening at Sundance in the Shorts competition Program 5.

How long did it take you to make your film?
It took about a year and a half, we stopped a lot because there was not to much budget that made the post production process too long.

How did you finance your film?
The film is a very low budget production, a lot of the money we spent was actually from my savings account. The equipment was largely lent to us by friends and local production companies.

What was the most challenging part of the filmmaking process and how did you overcome it?
One of the main complications we came across was the decision of the mining company to choose our acting crew for us. Our casting for the leading role had to be made among the team we had been assigned. Therefore the sort of casting and meeting with the crew had to be made on the first shooting day. Of course, the help of the mining company and the sort of joy that the miners had in making this possible was the main reason that this film was made succesfully. Another complication, and this one in a technical level, was the illumination. It was very clear from the start, that the characters of this short had to be mainly represented by the lights they were carrying, it was a specification I gave to Pablo Paniagua, the photography director. Finally he came across the idea of using a very little 1000 w fresnel connected to a motorbike battery hidden in the suit of the main character.

Tell us about your experience getting into Sundance. Are there any pointers for filmmakers for getting accepted?
I found out about our film getting accepted in Sundance while I was in a Script and cinematography workshop, at first I didn´t really realize what it meant, of course I knew about the size of this accomplishment, but I didn´t foresee the help that this recognition is going to give us in order to make the feature film we´re working on “Viejo Calavera”. We´re really proud of being the only latin american short film, and we are very glad to be representing.

If you had to make the film all over again, would you do anything different?
I would make it less solemn, it has too little humor.

What’s next for your film? Do you have distribution? If so, when and how can people see it and if not, what are your hopes for the film?
We hope JUKU enters another festivals, hoping that the possibility of raising funds for making “VIEJO CALAVERA”, the feature I will be directing, will be fruitful.

Can you provide any advice to other filmmakers who dream of getting their films made and into Sundance?
I think that one should be sincere with the things one does.