The Road to Sundance: Dr Breakfast, directed by Stephen Neary 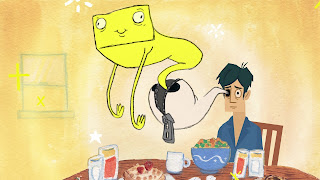 Tell us about your film. What inspired you to make it?
My film's called "Dr Breakfast" and it's playing in Animation Spotlight. It's about a lonely man whose soul bursts out of his eyeball at breakfast. The soul flies all around the world eating everything. Meanwhile, two deer bathe and dress the man's catatonic body.

I had some really old drawings of a soul bursting out of a man's eyeball--I save all my sketchbooks. And I wanted to try building a film based on a continuity of emotion rather than logic. I started thinking a lot about the creative process. For me it's very bumpy. There's lots of starting and stopping. Perhaps days of mundane work will go on before a little moment of eureka. And the whole time you're lucky just to have friends that tolerate your quirks and keep you sane. So most of all, this film is about that rejuvenating nature of friendship.

How long did it take you to make your film?
I worked on the Dr Breakfast off and on for about a year. I think I had various drafts of the script before that, but it didn't congeal until later. From there I did all the storyboards and animation. I live in New York City, but work in Connecticut, so most of the work was done on the train. Laptops, portable light-boxes, and lots of stares from strangers.

How did you finance your film?
I draw storyboards at a feature studio called Blue Sky for my day job, but really Dr Breakfast wasn't extremely expensive to make. The most expensive thing is my time--many boring hours. I paid my friend Robin Arnott to do some great sound.  And Nick Koenig wrote some awesome music. That money all came from the day job. Wish I could have paid them more though, cause it really sounds quite good.

What was the most challenging part of the filmmaking process and how did you overcome it?
Making an animated film takes so long, the hardest part for me is sticking with early decisions. When you're working on a personal project with no real deadline or expectations, it's easy to get lost. I had to trust my instincts, stick to my storyboards, and just make the thing or else I knew I could wind up working on it forever.

Tell us about your experience getting into Sundance. Are there any pointers for filmmakers for getting accepted?
I have no idea. I'm still pretty sure they made a mistake. I would say, just do your thing, make your art, enjoy. I've applied before, but I'm glad that this was the film that broke through for me.

If you had to make the film all over again, would you do anything different?
I would have changed a couple shots, adjusted things here and there. But at some point you've got to let go. I always think of this Chuck Jones quote, it goes something like, "Short films aren't made, they are abandoned."

What’s next for your film? Do you have distribution? If so, when and how can people see it and if not, what are your hopes for the film?
You can actually already see Dr Breakfast online. I put it up online a few weeks before finding about Sundance.

I might go with distribution at some point, but as an unknown filmmaker, the exposure is the biggest help. I'd love to keep sending to festivals. And I definitely want to keep developing these characters.


Dr Breakfast - TRAILER from pizzaforeveryone on Vimeo.
Posted by janekk at 10:54 AM