The verdict is in. Yes, YouTube can definitely be considered a platform for art, at least in my opinion. As independent filmmakers, we know that incredibly talented artists are creating work, often in obscurity, around the world, every day. And now the Guggenheim is validating this incredible work, which can be posted in seconds on YouTube, as museum-worthy.
This year HP, Intel, and YouTube joined forces with the premiere art museum Guggenheim, with locations in New York, Berlin, Bilboa, and Venice, to showcase the best that YouTube has to offer. They held a contest to which 23,358 videos from 91 countries were submitted and from which 25 were chosen as the top. And it's pretty impressive. Check out the videos at
YouTube.com/Play.
According to Nancy Spector, Deputy Director and Chief Curator at the Guggenheim, the mission of the YouTube Play. A Biennial of Creative Video was to showcase "the most unique and innovative video work to be created and distributed online during the past two years." I was intrigued and excited to see a museum honoring the work of unknown artists who use a distribution platform available for free to the world (who has internet access of course).
And the artists were from around the world -- 14 countries to be exact. The U.S. had the most at 9. The jury included (but not limited to) visual artists, filmmakers, and musicians.
It's yet another example of barriers being leveled for artists to express themselves and reach their audience direct. Now there is still the matter of monetizing and earning a living as an artist but step by step. This is a start and let's keep going and building the foundation for allowing art to be a viable means of earning a living.
So thanks HP, Intel, YouTube and Guggenheim for taking your time and resources to honor art that is being posted online direct by the artist. It provides hope to those of us in the trenches who need to be creators in order to live.
The videos will be on view to the public at the NY Guggenheim from October 22 to 24.
Here is a pic from the opening reception, during which the top 25 videos were projected on the interior rotunda as well as the exterior facade of the New York Guggenheim. It was pretty cool to watch. They even had musicians playing live to the video projection. Overall, it was a very inspiring event. Congrats to the winners! Let's keep making great work. And do it together! 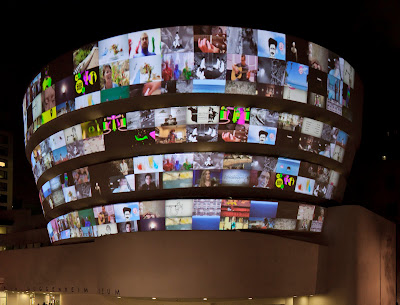 Email ThisBlogThis!Share to TwitterShare to FacebookShare to Pinterest
Labels: YouTube/Play

YouTube really is a canvas for art, but it is very hard to break trough all the "noise" that is there and be seen.

I love how Youtube help support the average Joe and Jane filmmakers and artists. No longer do you need fancy equipment and effects to reach an audience. However, there are a lot of "noise" as Richard says.

I love how Youtube help support the average Joe and Jane filmmakers and artists. No longer do you need fancy equipment and effects to reach an audience. However, there are a lot of "noise" as Richard says.