Who is Preston Plummer?
Preston Plummer loves physics, entropy to be exact. His life work is to study how things in this world tend to fall apart, not come together.
Struggling with a dark past, Preston has had a hard time relating to anyone as an adult -- until he meets Kate. Getting to know Kate inspires Preston to see the world in a different light.
Preston is a tough, highly intelligent young man. We found our Preston Plummer in Trevor Morgan. This summer, Trevor Morgan will become Preston Plummer in our film The Diary of Preston Plummer. Thanks for taking this journey with us Trevor! 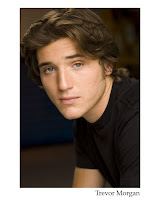 Trevor has appeared in the films The Sixth Sense, Genius, The Patriot, Jurassic Park III, The Glass House, Mean Creek, Empire Falls, Local Color, Off the Black, and Brotherhood.

Posted by Jane Kelly Kosek at 8:00 AM