Why Netflix Streaming Is Good for Indie Film

Our sales agent had a great tactic of allowing my films to appear on Video on Demand and then on online platforms such as Amazon and iTunes through our aggregator (Warner Bros. Digital Distribution) for the first 6 months to a year. We would see a lot of rentals and sales through these avenues.

And after this initial 6 month to a year period, the title could use a boost of exposure. That's where our Netflix deal came in. Netflix offers a license fee instead of a piece of each rental. This can be a double-edged sword, because if your film does really well on Netflix then you may be missing out on some revenue. But after having three titles on the site, I am seeing that their license fees are okay. Of course, I will always want more but I don't feel like their fees are inappropriate when compared to how the title fared on other platforms.

The downside to Netflix is that once your title is on Netflix, most people will figure out a way to watch the film on Netflix so you will be missing out on additional revenue through other platforms. You will likely see a downturn in your sales from other sites.

The upside is that you are exposing your film to a brand new audience who may not have heard about your film. Many people only watch movies through Netflix so your title is now garnering new fans. And it definitely works. I watched one of our titles languish in securing new Facebook fans for a few months. As soon as the film launched on Netflix, our fans started growing and we got new reviews we could promote.

A great way to promote your film is to create a quote page of reviews from various sources, including Netflix. We designed a quote page for Not Since You. It's been an awesome promotional tool. Check it out here: 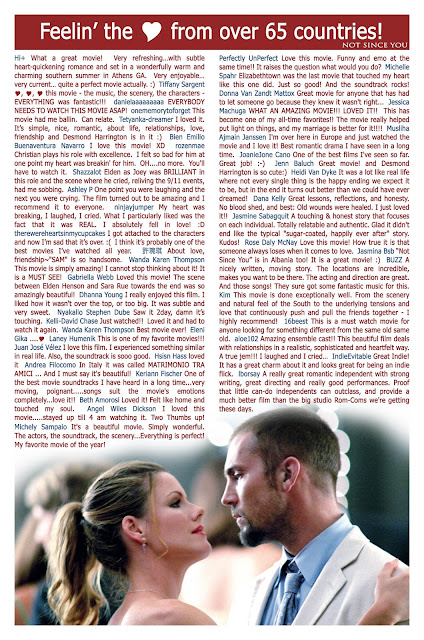 The nice thing about Netflix is that the license timeframe tends to be short - less than 2 years, sometimes only 1 year. This means if your title does well on Netflix, you will be up for renewal and obtain an additional license fee. One change in Netflix deals is that they stopped paying full license fees upfront. It's now a quarterly payment over the license period. I don't love that new system but I'm happy for the sale.

What I've found with Netflix streaming is that they don't have a lot of studio competition. Sure there are some good studio films on Netflix but overall, the streaming side of Netflix is comprised mainly of older titles and independent films. This means your independent film has the chance to stand out amongst all of the other offerings. I think this fact has helped our titles immensely.

I make films with romantic storylines and Netflix is a great place to try to get your romantic fix. The good thing for my titles is that there's only a handful of popular romantic films available on Netflix. So Netflix streamers are going to probably take a chance on one of my titles due to the lack of competition. I'm totally fine with that. Less competition, the better.

Luckily, each one of my titles has been rated pretty well on Netflix. That helps a lot. Viewers will see an above average rating for a film and give it a whirl.

So I say to the indie film community, give Netflix a whirl. Netflix can be a great way to increase your film's exposure, garner more reviews, and drive fans to other social media. I likey!

You can watch my two films on Netflix here: The Diary of Preston Plummer and Not Since You.
Posted by janekk at 10:29 AM

Email ThisBlogThis!Share to TwitterShare to FacebookShare to Pinterest
Labels: Netflix