The Road to Sundance: Teddy Bear, directed by Mads Matthiesen 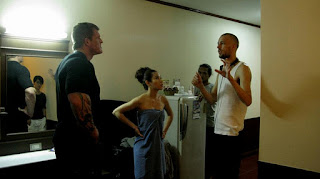 Tell us about your film. What inspired you to make it?
Teddy Bear [which plays in the World Dramatic Competition] is in many ways inspired by a short film I directed four years ago. The film is called Dennis and was in competition at the 2008 Sundance Film Festival. While making the short I got to know the bodybuilder Kim Kold who is playing Dennis. Kim was a non-actor and I met him doing casting sessions in the Danish bodybuilder community. I remember doing the first casting with him. He came in the room and starting doing the lines. I knew by that instant that this guy was something special. He could act and visually he was all I was looking for. Later in a master class I showed Actors Studies legend Frank Corsaro the short film and after seeing it he said: “Why don’t you make it into a feature?” This got me thinking and after meeting with the scriptwriter Martin Zandvliet we slowly started to work on the idea. Kim Kold was up for the challenge of doing a feature and we set out to do the film. And 2-3 years later I finished the film.

How long did it take you to make your film?
It took around 2 years to make it. And I have been working on it for 3-4 years from when I got the idea.

How did you finance your film?
The film is mainly financed thought the Danish government (The Danish Film Institute). Additional there are some television pre buys, fond money, distributions pre buys and private finances in the movie.

What was the most challenging part of the filmmaking process and how did you overcome it?
It’s hard to pinpoint one single challenge that was the hardest while doing this film. But one of them was definitely the fact that I wanted to work with “real” people in the cast. Most of the actors in the film are real people (“non actors”) casted in the environment we were filming. From the outset, it was my idea to create a credible story world with believable characters, almost documentary in tone. The story itself is, of course, wholly fictitious in which the “non actors” are acting, but the “cast” was composed of real people deployed in the real settings we portray in the film. The bar girls in Thailand are real bar girls, the men around them are the real people who hang out in these places, and of course, Kim Kold (main character) is a real professional bodybuilder. The characters were cast in their real locales, and the film was shot on location in the midst of all the crazy stuff going on.  Real people on “real sets” were used to create a credible world, to get as close to the “truth” of the characters. Working mostly with amateurs was a big challenge but also a gift because you get a great deal of authenticity when you work with real people in real environments.

Tell us about your experience getting into Sundance. Are there any pointers for filmmakers for getting accepted?
Sundance is a great opportunity to get you film out in to the world. For me the audience is an important element of why I have made this film and I think that with Sundance I have the possibility to get out to a much broader audience. I really hope that the film will connect with people and give them a good experience. Having the film shown at the festival has been on my mind from the start of the production of the film. It somehow began at Sundance with the project four years ago with the short film Dennis, and luckily I get to come back and show Teddy Bear. I’m very pleased that the film ended up like it did and that it was selected for the competition. I hope that Teddy Bear will make a tribute together with the other films at Sundance, and make it an inspiring festival of 2012.

If you had to make the film all over again, would you do anything different?
I don’t really think much about what I could have done differently. I do think of what has gone wrong so I can do it better next time. But making a film is a process where things are decided in an ongoing flow so how the film ended up is the consequence of many different elements in the process and in many ways it couldn’t have been done differently at the time.

What’s next for your film? Do you have distribution? If so, when and how can people see it and if not, what are your hopes for the film?
Hopefully the film will travel the world on film festivals after Sundance. Just after Sundance the film will be competition for the best Nordic film at the Göteborg Film Festival which is one of the big Scandinavian festivals. The film will come out in the cinemas all over Denmark just after Sundance and hopefully we will be able to sell the film to other territories.

Can you provide any advice to other filmmakers who dream of getting their films made and into Sundance?
I think that filmmakers should find their own individual path in the process. I can provide one advice: Go make your films whatever it takes! Make your film with little or no finance if the alternative is that you won’t get it made. The more films you make the better you get at it, the more you learn about telling stories though the film media.