The Road to Sundance: Bobby Yeah, directed by Robert Morgan 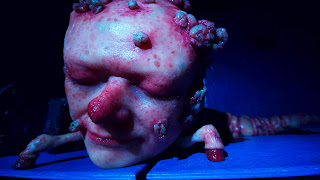 Tell us about your film. What inspired you to make it?
My film is called BOBBY YEAH. It’s playing in the Shorts Competition. It’s a crazy 23-minute stop-motion horror film about a petty thug who gets into some very, very deep trouble. I’d made a series of successful short films before, and was writing some feature projects and was sort of trapped in development hell with them. After a few years of this, I just dropped everything and decided to burn off some creative frustration with another short. I was sick of writing, so I decided to make this film without a script. So I just started shooting the first thing that came to mind, watched it back, then basically made up the next moment, shot it, and so on. The entire film was made up chronologically as I went along, so I had no idea where the story was going as I shot it.

How long did it take you to make your film?
I shot it in my spare time over a 3 year period.

How did you finance your film?
There was no budget as such – pennies really - I paid for the main bulk of the production myself through a teaching job. When I’d finished my final cut and sound edit, I showed the film to Alain de la Mata and Geoff Cox at blueLight, who agreed to finance the sound mix, picture grade and mastering.

What was the most challenging part of the filmmaking process and how did you overcome it?
The actual shoot was great fun. Because of the nature of the process, it was constantly surprising to me where the story was going, so I was discovering it as I went. I was my own producer and financier, so the film was able to find its own natural pace of production. The hardest part was handing it over to the picture-graders at a certain well-known post-production house in Soho. They have a great reputation, but because we didn’t have much money, they clearly didn’t give a shit about the film, and did a very lackluster job. I ended up getting blueLight’s money back and grading it myself from scratch in After Effects. Lesson
to filmmakers: don’t collaborate with people who are not passionate about your film!!

Tell us about your experience getting into Sundance. Are there any pointers for filmmakers for getting accepted?
BlueLight and I entered it very late because for some reason we had it in our heads that it would need to be a premiere to be considered. At the last minute I realized this wasn’t the case and we got it in just before the final deadline. I didn’t think we’d be selected, because the film is really, really far out, but figured it would at least be worth trying. Of course I was wrong to doubt – Sundance has a track record of supporting weird and wonderful films. As you can imagine I was pretty thrilled when I found out! As for pointers to other filmmakers, I can only speak from my limited experience – don’t try and second guess what an audience will want – just make the film that you want to make.


If you had to make the film all over again, would you do anything different?
I’m happy with the film, but if I were to make it again, I’d do all the post-production mastering myself, and only go outside for the transfers to tape. I'm a complete control freak!


What’s next for your film? Do you have distribution? If so, when and how can people see it and if not, what are your hopes for the film?
I’m touring festivals with it at the moment. I think blueLight may have some plans for distribution but I’m not sure I can talk about that just yet. I have a facebook page for the film, which is the best place to go for screening / distribution news: www.facebook.com/bobbyyeahfilm

Can you provide any advice to other filmmakers who dream of getting their films made and into Sundance?
I think you need to listen to your instincts and make films that you really want to see. And nowadays you don’t need loads of money, so just get on with it! Plus, there’s nothing worse than finishing a film and not being proud of it (I’ve been there in the past). With this film I just made sure it was everything I wanted it to be, with no compromises. I think that’s why people respond well to it.