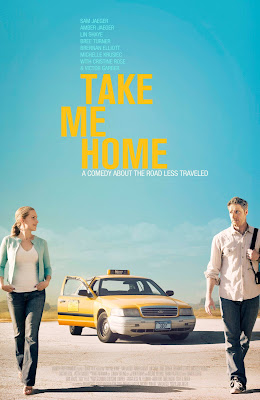 We are super excited for our film Take Me Home. It has it's world premiere at the Nashville Film Festival next month and we just secured our domestic and foreign sales agents. We will share it with the world at MIPTV and lock in our first foreign sales at Cannes - oh yeah!
This has been a long road for Take Me Home. I met Sam Jaeger (who is now on Parenthood) years ago - prior to his work on Eli Stone and Parenthood. He gave me the script to Take Me Home and I knew from the first read that I'd love to help make the film. I am so glad to have been a part of this film.
Well, many months later after we tried to raise the money more traditionally, we decided to take the leap of scraping the funds together from $5k here, $5k there. And we did it.
We then shot for 2 weeks one summer by driving across the United States from NYC to LA and then waited a year and shot the LA portion, cheating interiors, for 2 more weeks.
It took another year to finish the film and we are now ready to premiere and sell!
Whew!!! The life of an independent film is truly loooooooong. But I have to say it's worth every second.
Posted by Jane Kelly Kosek at 12:15 PM

Wow, congrats, seems like everything is going well with your movie!

Love lifts us up where we belong. God bless you. Read interesting posts on my blog and share them with your friends. You can also support my by visiting my sponsors by clicking on one of the ads.