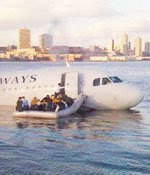 What a great feeling! Hats off to Captain Sully. I still can't believe a commercial aircraft landed in the Hudson River! Wow! To be able to watch a horrible event on the news and know that everyone involved is safe and sound is such a change of pace. It reminds me of the feeling I had when Obama won the presidential race. We need more movies about heroes.
I would much rather read and watch stories about heroes like Captain Sully than hear about another horrible terrorist and serial killer. The same goes for movies. Maybe I'm just getting older and have had my brain filled with too many dark depressing films, but I'm finding that I'm drawn to more uplifting films these days. I'm sure that the state of the economy and the war and global warming etc. has helped me want to seek entertaining films over ones that make me feel depressed. 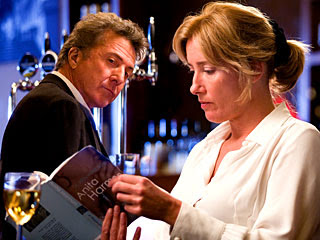 Last Chance Harvey is out this weekend. This film has an independent spirit about it. The leads are older (harder to fund a film with older leads) and it took the passion and help of Emma Thompson to get it cast and made. Passion is a huge part of indie filmmaking. So as I am riding high on the heroism of Captain Sully, I just may go to the theater and get a little more joy watching a frumpy Emma Thompson (she chose to be a size 16 in this film) and an aging Dustin Hoffman fall in love. I miss the Dustin Hoffman of Tootsie and Kramer v. Kramer. I could use a little of him this weekend. Over and out!
Posted by Jane Kelly Kosek at 9:58 AM

Email ThisBlogThis!Share to TwitterShare to FacebookShare to Pinterest
Labels: Storytelling